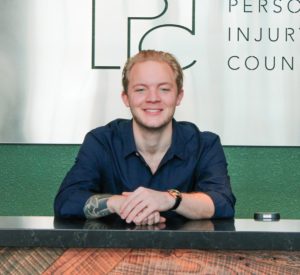 Sam Parker has been with EPIC since January of 2021 as our front desk clerk and receptionist at our office in Tacoma. Sam is incredibly hard working, level-headed, friendly, and diligent. He’s a huge asset to the EPIC team in keeping things organized and running smooth.

When Sam isn’t helping out at EPIC, you can find him pursuing his true passion, music.

As frontman of “Sam Parker Music”, 24-year-old Sam is an incredibly gifted musician. Sam acts as both lead vocalist and guitar player for the operation. His bandmates Trey Codwell (drums), Isaac Mac (bass), and Peter Gray (keyboards) come together to create the unique sound and vibes that their band is known for. “Sam Parker Music” (formerly known as “The Sam Parker Trio”) is an indie/soul/rock band based out of Tacoma. They’ve been together for over 2 years.

Sam has had a deep connection with music his whole life. From a young age he began playing cafes and other events, deciding in early high school to commit to music as a career. Sam takes much of his musical inspiration from classic rock and from his older brother, Josiah.

When COVID first hit, Sam dedicated hours to writing new material and testing it out by playing street corners. Despite hardships, the last year has reinvigorated his musical passions, and he’s eager to get back to playing live.

As COVID restrictions continue to ease nation wide, Sam hopes that he and his band can resume touring, both in Washington and in other states as well. His vision is to continue to write new music and grow his musical abilities and audience.

Sam is a Washington native. Before COVID hit and restrictions were put in place, Sam hosted a monthly open mic night at Incline Cider House in Tacoma. With restrictions letting up, Sam plans to continue this event. Sam’s favorite pizza is a classic combo with pepperoni and sausage. In April of this year Sam was featured at The Old Still. Catch his amazing performance below!

You can find more of Sam’s music on Amazon Music, Youtube, and Spotify. Keep up with the latest from Sam by following him on instagram!