Cameras are Being Used by Resorts to Enforce Terrain Closures 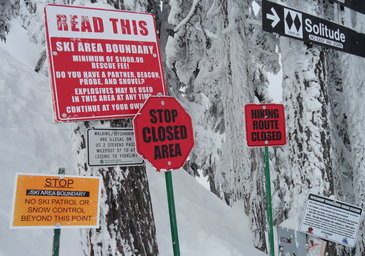 Resorts have been dealing with the increasing pressure of enforcing terrain closures.  Busy resorts due to inexpensive mega-passes and easy to use backcountry touring gear, plus media culture that has encouraged skiers to seek fresh turns, has pushed more and more skiers beyond the traditional resort boundaries.  In the past, resorts have relied upon rope lines, signage and patrol to enforce closures.  As technology improvements have made it easier than ever to post cameras around the resort in places that would have been out of reach years ago, resorts are increasingly using cameras to help enforce closures – and catch offenders.

There are good reasons for boundary closures.  Ski Patrol will usual tell you that they don’t want to close anything they don’t have to.  Generally, they want to get skiers out on the mountain.  But, when terrain is closed, its almost always for safety reasons.  Snow and avalanche mitigation work is common reason for closure in the West.  Sometimes avalanche danger alone will keep some terrain closed.  This can take the form of danger to the skier or border or to others downslope.  Other times terrain is closed because it leads to a serious hazardous condition, such as a cliff or terrain trap that a skier or boarder might not otherwise anticipate.

The Summit Daily recently reported that Copper Mountain captured a boundary violator on camera.  This was particularly relevant because this skier also triggered a small avalanche.  Fortunately, no one was injured.

Our team here at Epic Law hopes you keep it safe out there.  Observe terrain closures.  This is important not only for your own safety but also the safety of others.  And remember, if you do decide to cut under the rope line, not only are you putting yourself and possibly others in danger, you might also be on camera.